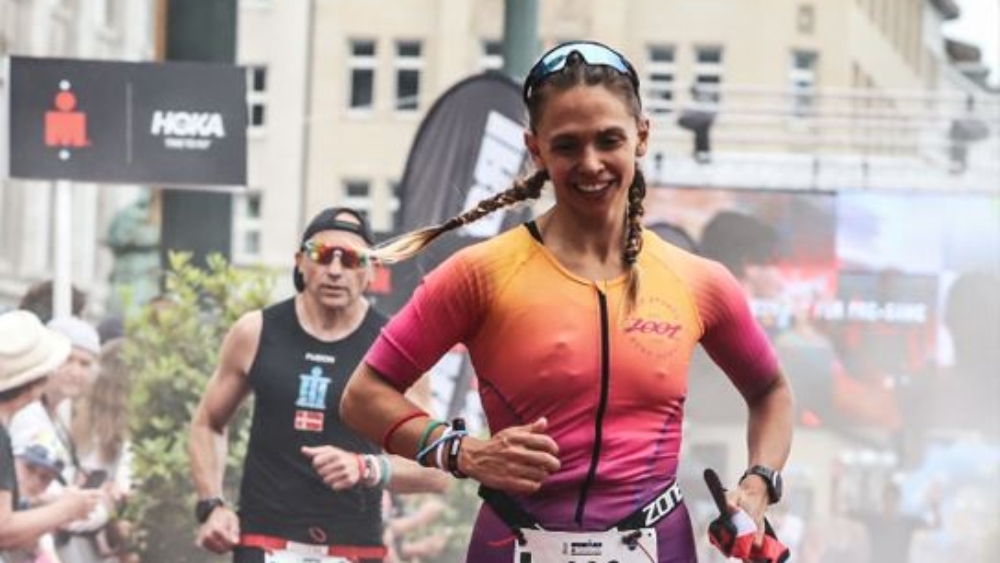 Becoming an Ironman in one year? – Trust me, if someone who can’t swim, is a very average runner and not too bad a cyclist can do it, then most people can. The only thing is consistency, discipline and in my case also an excellent coach to lead you through the process :)

In August 2020, while waiting for my flight from Slovakia to Dublin and aimlessly browsing the internet, I saw an ad for a triathlon race in Lough Cutra. Without knowing what a triathlon race actually entails, I signed up for the olympic distance. The race was meant to take place in May 2021.The race ended up being postponed to September and I thought it would be fun to try to do the middle distance given the fact that I have some extra time. Fast forward to April 2021 and still not being able to swim, I joined T3 and the swims in Clontarf Baths – not being able to swim one length :D

All went well, I completed the middle distance and the next day I signed up for Ironman Hamburg.

The eight months leading to the race were intense but nothing too dramatic or worthy of a movie script. I also had no special reason why I wanted to do an Ironman, I just thought I would do something that most people wouldn’t, which probably helped to take some of the pressure off. Having said that, I wanted to do as well as possible so quitting alcohol for most of the year was a little sacrifice I was happy to do :D

The year flew by and I was ready to pack my bike into my brand new red bike box. The most stressful part of the weekend was getting through Dublin Airport and praying the bike will make it over too. It did! I even managed to get it all assembled once I was in the hotel by myself  – watching those countless YouTube videos definitely helped.

From then on, it was a very smooth process. The check-in was very simple, the instructions were clear and the briefing videos were pretty straight forward. After setting my bike and race bags down in the transition area, it was time to chill, eat some pasta and hope for not too hot and windy weather.

Hamburg has a pretty straightforward course. It’s a one lap swim in a lake in the city centre followed by two loops on a bike and then four loops run around the town.

I woke up nice and early, forced in a slice of bread with some PB and jam, did my hair just like Lucy Charles does (thinking it could only make me faster) and went to the transition to check on my bike, fill the water bottles and squeeze as many Haribos into the bento box.

The atmosphere at the swim start line was incredible and with the sound of the Pirates of the Caribbean theme I jumped into the water to start the adventure. The swim felt never ending and if you know my (non) existent swimming background, you can guess why… I managed to get out of the water in 1h21mins and was reasonably happy with that. The transition in Hamburg is super long so 850m later I found my bike bag, put the helmet on, got a gel into me, grabbed the bike and ran towards the mount line where I semi-successfully attempted to jump on it while running.

I truly enjoyed the bike leg of the race and the only one set back was my bike monitor falling off after going through rail tracks approximately hour and a half in. Without wasting too much time I got it back and started pedalling again. The nutrition went according to plan, the head wind wasn’t too bad and in just over 5h and 30mins I was jumping off my bike to start the most dreaded part of the race – the marathon.

I had never ran a marathon before (and I still don’t understand why someone would want to run 42k) so I wasn’t sure what was going to happen or how I was going to feel. I started strong and gradually died towards the end – hello pacing strategy! – but still managed to get it done in just under 4 hours. It was harder mentally than physically, but I knew I was able to finish it, and I just had to keep reminding myself of that every two hundred metres from the 32nd kilometre mark until the end. Germans love triathlon and it really showed – thousands of people were cheering the athletes on while running through the town. The atmosphere was incredible.

11hours and 9minutes from the moment I jumped into the lake, I was crossing the finish line being called an Ironman!

From what started as a random adventure, triathlon is (hopefully) a bit of a lifestyle for me now.

Stay tuned for my Kona report in three years! 🤞