(a.k.a. when the (timing) chips are down)
by Andrew (Chuck) Walker 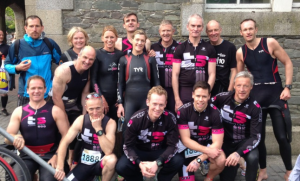 Being June bank holiday Saturday that could only mean up at 6am , stodge for breakfast and a trip down to the banks of the River Barrow for Ireland’s fastest triathlon – says who? The weather at least was good. At registration it seemed somebody had run off with my chip which resulted in an upgrade (!) to wave 1 and into the ladies and relays wave – interesting !

Anyway only time before the 10am off for a quick T3 group photo sponsored kindly and very generously by Lidl ( a well run multi chain retail store) though some members were unavailable as still fixing their hair it seems (Ben H./Doug – though I suppose they have some ! ). Gary at least got his muscles pumped and Cahir his thoughtful look on (see above). As an aside we need to have a post race photo to compare and contrast and see who’s smiling now !

Then a quick dash along the riverside with just enough time to catch the end of the double Olympians finish their swim (not Ian and Evan who were well past) and a plunge into the murky waters to join Kim, Jenny, Laura and Aideen.

Waiting in the water for the off with a wave of c. 100 ladies was far more polite and mannerly than what I was used to and this continued as we headed upstream with everybody happy to take their place in the water. I kept close to the bank to minimise the current (no doubt Peter will say that’s a load of rubbish) and hence as we approached the 600m turnaround buoy I moved out into the middle stretch of the river and where things were now vastly different. Rickshaw rush hour in Mumbai would have been quieter – feet and legs everywhere and Laura has the proof. Then the turnaround – wow – cats in a bag would have been impressed with the squabbling to get around the marker. Anyhow having navigated these hurdles the downstream reverted to a more sedate pace especially as pointed out by Ben the current seemed to be coming sideways.

T1 was uneventful, helped by the scarcity of competitors at that time and off up the road enjoying the wind assisted bike leg. Then of course one hit the ‘technical’ part of the cycle. When I started triathlons I thought if a cycle leg was technical it meant something you might have to think about – now I know it simply means it is either uphill/lots of turns/poor road surface or all of the above. Not many fellow T3ers spotted on the bike save for trying (unsuccessfully) to rein in Laura who held me off during the long spin head wind back to the town and until after T2.

Into the run and what then was another interesting experience. On the way out to the 5km point you had a chance to play ‘chicken’ with the Double Olympians along the narrow course and on the way back you now had the tsunamis of competitors grouping and endeavouring to push you into the river – anyhow took your mind off the pain as did the uplifting sight of Jenny and Kim literally sprinting with only a short 4kms to go ! Nearer home, more T3ers honed into view (though no Gary) and the usual ‘you’re looking great’ remark passed. The finish was as always a relief and within seconds Laura joined me to watch as the remaining waves swept in. Hence we had a great view of Gena and Dave finishing serenely – T3’s most improved athlete of the year Ben H. knock socks off last year’s time – and then the classic photo finish between Gary and Liam (large frame), as well as the 2:20s athletes –Kim/Ed/Eddie (maybe)/Cahir and Ryan, along with the inspirational Jim and Aideen.

At least time now for the haut cuisine chicken curry, though no coffee and post mortems ! Later on a select group convened for a few very pleasant bevies and food in Ranelagh arranged by Ben.

Of course the main talking point in years to come will be the mysterious time warp which floated over Athy that morning leading to it taking Liam 2 ½ minutes to run 20 metres at the finish line/ Doug to lose a couple of decades/ and my swim to be timed at the outrageously slow 5:37.

Rumours of Gary selling the bike are ill-founded by the way Barry, it’s only the wheels !

Anyway, no time to rest for T3 as its ‘Go GO GO’ for Kilkee and the relentless pursuit of NS points.